All trustees are volunteers and have the necessary skills to contribute to the management and development of the European Guide Dog Federation (EGDF).  The Trustees have a duty to uphold the Nolan principles in public life as well as identifying and reviewing risks to which the charity is exposed and ensuring appropriate controls are in place to provide reasonable assurance against fraud and error. Where appropriate, risks are covered by insurance.

We have referred to the guidance contained in the Charity Commission's general guidance on public benefit when reviewing our aims and objectives and in planning our future activities.

EGDF represents the needs and interests of both Europe's guide dog users and guide dog providers. Originally set up in 2007 by one of its national members, EGDF continued to develop its capacity to become a more representative and independent European umbrella non-governmental organisation, including the diverse views of its members in the policy­making process at European level.

The main objectives are as follows:

The main focus during the year was to continue building relationships with other European organisations with similar interests, increase the membership across Europe, develop new sources of income and build the capacity and influence of EGDF.

We continued to work with members and stakeholders and especially with members to develop their organisations, to facilitate cooperation between members to achieve best practice and to help fledgling members get started and operate effectively. We met with existing or potential members in each country where we attended conferences or meetings.

Our 10th-anniversary conference met in Malta from 30 November to 3 December 2017.  It was well attended with delegates from 17 countries.  The 16 working guide dogs in attendance were a record number of guide dogs ever assembled in Malta.

We were honoured that the President of Malta, Her Excellency Marie-Louise Coleiro Preca, spoke at our conference.  She was introduced personally to all the guide dog owners present, welcomed the conference delegates to Malta, and then spoke with passion about the special relationship that is formed between people and assistance dogs, being a source of strength and confidence.    She remarked how the situation had changed since the days of her blind grandmother, who was never expected to do anything independently after losing her sight.  She took the opportunity to commend the EGDF for the ongoing work in advancing the needs and rights of guide dog owners at a European level.

It was the second conference to which supporters had been invited as well as members; there were more of them this time, and the feedback demonstrated that supporters benefit from the presentations and make a positive contribution to the conference.

The delegates summarized the conference themes as follows:

Much of our work during the year concerned the development of a set of European standards, called CEN/TC 452 “Assistance Dogs”.  We worked closely with our members as well as the International Guide Dog Federation and Assistance Dogs Europe in this project, which will take several years to complete.  It is the first time that countries have come together to define assistance dogs, their breeding, training, welfare and the rights of partnerships.  The increasing number of fake assistance dogs in North America has created serious problems that the standards aim at preventing in Europe.  We served as experts on CEN/TC 452 Working Group 1 “Vocabulary” with 24 other experts, refining definitions and terminology to underpin the future standard.  There was an excellent spirit of cooperation despite differing customs and opinions, showing a wide acceptance of the importance of the standards work and a determination to succeed. EGDF’s expenses for participating in the standards work has been funded by ANEC, the European consumer voice in standardization.

Collaborating with Other Organisations 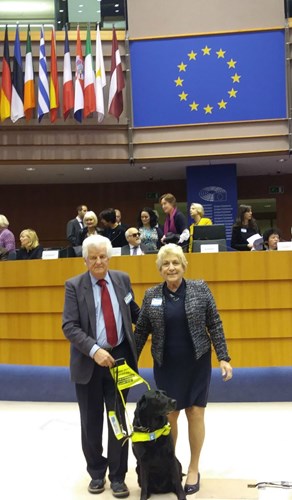 We contributed proactively to the European Disability Forum, representing 80 million disabled people across Europe, to ensure that guide dogs and other assistance dogs are considered in all their initiatives. We were invited to attend their annual general assembly in Madrid, and the European Day of Persons with Disabilities followed by the 4th European Parliament of Persons with Disabilities in Brussels.  It was only the fourth time in the history of the European Parliament that their chamber was turned over for the entire day to 600 disabled people to engage in dialogue with European leaders concerning their rights.  The issues focused on citizenship, political participation, sustainable development and urban accessibility.  The photo to the left shows EGDF President David Adams, Executive Director Judith Jones and guide dog Zoey during a break in the parliamentary proceedings

As members of the European Coalition for Vision we reported on our work in CEN/TC 452 and have been assured of their support for this project.  We produced an article about EGDF for the ECV newsletter on International Guide Dog Day.

We were pleased to participate in several meetings of the Heathrow Accessibility Advisory Group to consult on an informal standard for assistance dog toilets at the airport, based on a specification already adopted in the USA.  They have agreed to include these toilets in all new projects and major redevelopments.  This initiative will encourage other European airports and transport hubs to follow suit.

Executive Director, Judith Jones was invited to attend the annual meeting of the European Commission with National Enforcement Bodies, a high-level meeting of a representative from each national civil aviation agency, EC officials, and other European-level experts.  She explained the work of CEN/TC 452 and its benefits for air transport.

We continued to support the first guide dog school in Turkey, a country with a population of 80 million people and, hitherto, no guide dog service.

The website and social media accounts are growing steadily and proving effective in campaigning. We send out newsletters periodically to 900 members and subscribers. These have a high acceptance rate and improve our communication between EGDF and its stakeholders and enable members to share best practice and influence policy-makers.

We thank Debbie Jarvis for her valuable contribution to EGDF by volunteering to take on the tasks of membership secretary and conference administrator.

It has been an official Non-Governmental Organisation (NGO) since 2007. Currently there are 47 members and in 26 European countries. Some of its full member organisations have been working together for many years. Some members are fledgling organisations and others have passed this stage and are busy developing new guide dog services.

Before the creation of EGDF, guide dog users were largely invisible citizens at EU level, seen as a sub-set of the blind and partially-sighted community. They missed opportunities to influence EU decision-making directly in favour of their own specific needs and interests and rarely acted together. EGDF enables guide dog users across Europe to play a direct role in shaping policy and legislation to bring about their full and equal citizenship. We work closely with Assistance Dogs Europe on campaign issues we have in common.

The European Guide Dog Federation is dedicated to influencing laws, policies and attitudes and to ensuring excellent facilities and access for guide dog users.