Report of 2017 Conference in Malta

More than 50 delegates from 17 countries, accompanied by 16 guide dogs, gathered in Malta at the end of November for the 10th anniversary conference.

As President of Malta Marie-Louise Coleiro Preca entered the conference room she was met by a "guard of honour" of all people attending with their guide dogs. In the left photo she is shaking hands with Dr Andrew Lamb, newly elected vice-president of EGDF.  At the far left is outgoing vice-president Karine Garnier. Centre photo: In her opening address, the president commended the delegates for the work they do and the subjects they would be discussing at the conference.  She remarked how the situation had changed since the days of her blind grandmother, who was never expected to do anything independently after losing her sight.  In the right photo, EGDF President David Adams and Executive Director Judith Jones thank the President of Malta. 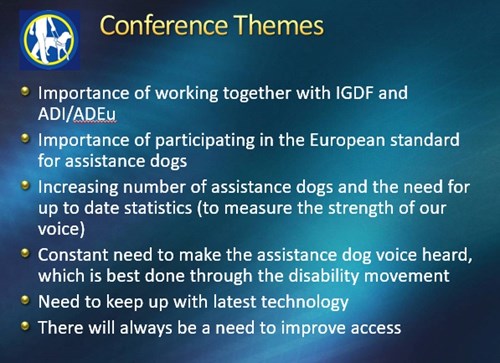